The mission of the Montpelier Public Library is to provide the community with superior library services including information, recreational, educational and cultural materials and/or programs, at the most reasonable cost. This is a continuing obligation to which all other obligations are secondary.

In 1927 Mr. Harry Moffitt, superintendent of Montpelier Schools at that time, called seven residents of the community together to form a Board of Trustees of the Montpelier Public Library. Board members included Mrs. Donna Beals, Mrs. Ruth Boone Limpert, Mrs. Bessie Dwyer, Mr. Paul Sloan, Mr. Bard Spake, Mr. Edwin Walter and Mrs. Clela Bible. Today the library remains a School District Library under the jurisdiction of the Montpelier Exempted Village Schools with board members appointed by the Board of Education.

The library remained in the high school until 1937 at which time it was moved to a two-story building on West Main Street owned by Charles Changnon. In 1958 the library moved to it's present location in the 200-block of East Main Street. This move was made possible in part by a bequest from the late Dora Rosenberger. Mrs. Rosenberger, whose home was on the present library site, left upwards of $10,000 in cash plus the lot and some small rural property for a new library. Her only stipulation was that the library be built on her home site. Following the bequest, the Montpelier Board of Education authorized a one-mill levy which carried substantially. The levy plus the bequest produced from $55,000 to $60,000, which coupled with a small construction fund, enabled the library board to proceed with building plans.

In 1984 the Montpelier Library asked the voters in the Montpelier School District to approve a levy which would provide for the improvement and renovation of the existing facility. The library underwent a substantial renovation with a dedication held in May of 1986. Mr. Fred Bauer, a former Montpelier resident, now a noted author and publisher, acted as keynote speaker for the dedication.

In 2005 the Montpelier Library purchased the adjoining property situated at 213 South Harrison Street for future expansion. The duplex was demolished in June of 2008 and in November the library broke ground for a 2000 sq. ft. addition which would include a dedicated children's area. The addition was fully funded by library reserves and completed in May 2009 with a dedication / grand opening held June 6, 2009.

In the summer of 2011 Faben Memorial funds were used to purchase a bronze statute titled "Summer Reading". The statute, set at the south entrance to the 2009 expansion, is a memorial to Walter and Esther Faben.

In the winter of 2013 Faben Memorial funds were used to contract with W. C. Hellers & Co. to build a fireplace designed by local architect Christopher Kannel. The fireplace provides a warm and inviting atmosphere in the adult reading area of the main library. 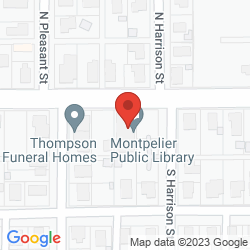